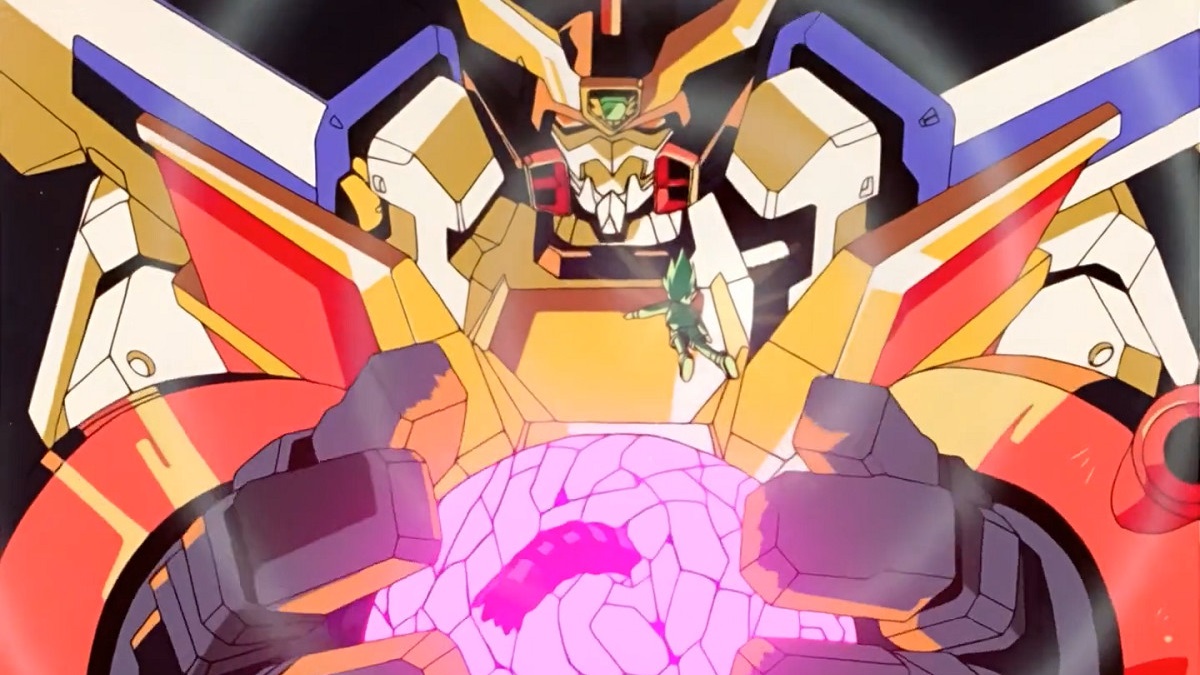 If you love super robots from the 90s, then you are in for a treat with the Brave, or Yuusha, Series. At an impressive 430 episodes spanning 9 seasons, one spin-off, one OVA, and one re-cut, the Brave Series is the show that is often credited with reigniting Japanese interest in super robot anime.

And this is all thanks to the declining popularity of Transformers in Japan.

The Brief Rise and Fall of Transformers Anime

In the 1980s, Japan was treated to its own series of Transformers anime.

Initially, the first three seasons of the show that aired in the United States were dubbed for Japanese audiences. Rather than dub the fourth season, Takara (Japanese toy company), spun off their own Transformers series in a partnership with Toei Animation. This new story took a different direction from the American show.

The Transformers anime feature familiar characters and many new characters not seen in the American show.

Eventually, the popularity of the series waned. Then things soured between Takara and Toei and the series was canceled.

The Start of a Super Robot Franchise

The cancellation of the Transformers anime led to a collaboration between Takara and Sunrise Studio. The aim was to create a new super robot anime series and toy line. This is what would be known as the Brave, or Yuusha, Series.

Not surprisingly, this new series was very similar to Transformers in that it features robots who transformed into vehicles.

A recurring theme throughout the series is that there is one main “hero” robot who teams up with children to thwart evil robot invaders.

The Brave Series in Chronological Order

With the exception of the first two, the seasons are not interlinked. So there is really no “right” way to watch the series. So that means you can either watch it all or pick and choose based on what grabs your attention.

But if you decide to watch the whole Brave series, you may as well watch it in the order of release.

Brave Exkaiser was the first anime of the Yuusha series. And it’s obvious early on that this series borrows heavily from the Transformers concept.

The show starts with alien orbs circling the planet and discussing their intent to loot the planet. Fortunately for Earth, intergalactic space cop Exkaiser is an ally of the humans and is dead set on stopping the Geisters.

Exkaiser settles on the planet as a family commuter car. Not long after, he intervenes in an evil dinobot’s attempt to steal a family camera. This is the start of a close bond that he forms with the young child protagonist.

2. The Brave of Sun Fighbird

The Brave of Sun Fighbird takes place in 2010. In this story, the “hero” robot inhabits an android body to mask his appearance from a wicked alien energy being and an evil scientist accomplice.

Side note, this is the anime from which the “is this a pigeon?” meme originates.

3. The Brave Fighter of Legend Da-Garn

In the third season of the Yuusha series, 6th-grade boy Seiji Takasugi travels the world searching for the “Brave Stones.” These stones are Brave Robots who must awaken and fuse with people and machines to unleash their true power.

In all, there are 8 Brave Robots, and Seiji must free them all in order to have any chance at saving the world from devastation.

Senpuuji Maito is a teenage billionaire CEO of his late father’s railroad company. He uses his position to command the Brave Express robots in his war against crime.

The show takes place in the 1950s and has a monster of the week approach. This gives the show a feel likeof a throwback to an older era of anime.

The ending of this series was somewhat controversial at the time. And was seen as a sign of growing tensions between Sunrise and Takara.

In the year 2020, the Brave Police construct a new Super Robot with advanced AI. This Super Robot is named Deckerd and his purpose is to counter high-tech crimes.

After becoming lost in a manufacturing facility, grade-schooler Yuuta Tomonaga discovers Deckerd. Yuta and Deckerd develop a bond which leads to Deckerd taking on a human-like personality. This newfound personality has the side effect of an increase in performance capabilities.

This connection leads to Yuta’s appointment as the boss of the Brave Police.

6. The Brave of Gold Goldran

The Brave of Gold Goldran feels like a departure from the more serious approach behind the previous two seasons. By comparison, Gold Goldran feels more childish and silly in its presentation. However, this should not dissuade anyone from watching this season.

Brave Command Dagwon took the concept of the Brave series in a different direction. In this season, rather than young boys teaming up with robots, the young boys became robots through the use of power suits. This gives the show a vibe similar to Ronin Warriors.

With that said, the premise of the show is fairly similar to other entries in the series. And in this season, five high school protagonists do battle against alien invaders.

This season was followed up with two OVA episodes that are a follow-up to the series and show the team enjoying a newfound period of peace while also squaring off in a new battle.

8. The King of Braves GaoGaiGar

The last season of the series is arguably the most popular as well.

This season released hot on the heels of Neon Genesis Evangelion. However, in stark contrast to the more serious undertones of anxiety and depression found in NGE, GaoGaiGar (GGG) is more cartoonish and focuses on themes of hope and redemption.

GGG starts with a Golden Mech Lion delivering a mysterious orphan baby to a couple. This couple raises the child as their own. As the child grows, the mysteries of his origin are revealed as he works in cooperation with the cyborg Kai to fight off the invading force of Zonders.

The King of Braves GaoGaiGar is also one of our top anime picks of the 90s!

Due to the popularity of GaoGaiGar, this season was treated to a spinoff and sequel series.

The sequel was first released as an OVA, and then later on this OVA was adapted into a television series. So you can watch the OVA and the tv series, but the tv series does capture the events from the OVA.

Betterman is a spin-off that takes place in the same world as GaoGaiGar. However, the show contrasts with GaoGaiGar by taking a dark step into the realm of the occult and horror.

In Betterman, a strange virus called “Algernon” is causing mass suicide and murder on a worldwide scale. This sets off an investigation by research institute, Modi Warp, to discover the truth behind this disturbing virus.

The King of Braves GaoGaiGar Final

This was an eight-episode OVA sequel taking place two years after the events depicted in the last season of the Yuusha series.

This sequel has new characters and familiar faces squaring off against a new global threat with the aid of a new mech fighter.

The GaoGaiGar Final OVA was recut into a 12 episode series for television 2 years after release. Some parts were censored for tv audiences, and additional animation and story elements were added to tie the series to Betterman.

End of the Yuusha Series

The relationship between Sunrise and Takara eventually soured and much of this can be attributed to a difference in priorities. Takara sought to cram as many characters and character variants into the stories as possible to create additional opportunities for toy sales. On the other hand, Sunrise sought to create character-driven stories with complicated plot points.

This eventually led to a parting of ways. But the end result of this relationship was a decade of solid super robot anime. And for that, we are thankful.

If you love mech anime, be sure to check out our post on the best mech and super robot anime of the 90s!

The Greatest Seinen Anime of the 1990s

Porco Rosso: The High-Flying Pig Prince of the Sky!